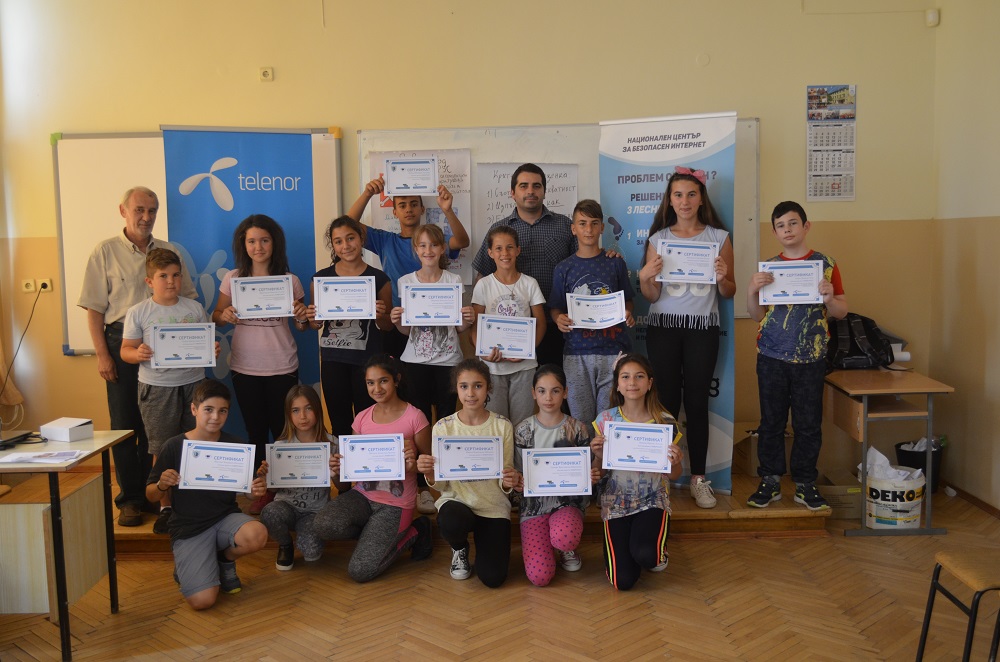 For the third year running, the Bulgarian Safer Internet Centre has been training students aged 12 and 13 across the country to advise and help their peers who have faced a risk or an incident on the internet and also how to raise awareness about internet safety among other children. 242 Cyberscouts were trained in 2017 in 12 towns in Bulgaria: Pazardzhik, Sofia, Oryahovo, Dalgopol, Svishtov, Rakovski, Radomir, Belozem, Chalakovo, Plovdiv, Kyusetndil and Elena.

The first day of the interactive training is focused on online risks and ways to avoid them. The pupils are taught how to verify the new online friends and if they are fake, which are the typical indications to identify if the new "friend" could be a paedophile, how to react to cyberbullying, where and how to report any concerns.

During the second day, the children are prepared for their three key roles as Cyberscouts via simulations and discussions: 1) To be a model for safer internet use. 2) To help peers with advice. 3) To reach out to other peers and transfer their knowledge.

At the end of the training, the students receive a Cyberscouts Certificate and are then invited to form their teams, prepare and conduct an initiative or event for their peers. A national jury selects the three best initiatives based on feedback from teachers, photos and other materials the teams have prepared. The three best teams will be then invited to the national Safer Internet Day event on 6th of February 2018 in Sofia where they will receive Certificates of Achievement from the Ministry of Interior and gifts from Bulgarian SIC’s industry partners.

The SIC maintains communication with all the teams who passed the training via closed Facebook groups for each year's Cyberscouts. Students can access these closed groups via their parent's or teacher's accounts on Facebook. They receive information about new risks, various initiatives and events, and are regularly assigned missions. With each new completed mission, the teams receive scores and continue competing with the other teams around the country.

Parallel to the training of the children, trainings of teachers also took place, with 116 trainers trained in 2017. They were acquainted with the main risks on the Internet and important research data, including key findings from the National Representative Survey on Online Behavior of Children in Bulgaria, conducted by the Applied Research and Communications Fund and Market Links sociological agency in 2016.Teachers were also thoroughly acquainted with the objectives, tasks and methods of the Cyberscout training program. They were made aware of how they could support the children’s work after the end of the training.

The Cyberscouts programme was launched back in 2015 with financial support from the European Commission and Telenor Bulgaria, and the support of the Ministry of Interior and the Cybercrime Unit. At the end of each year, a competition between schools is held for their students to apply for the Cyberscouts training. A jury then selects the schools and a team of three experts from the Bulgarian Safer Internet Centre visits the school and train groups of up to 30 children over a period of two days. For the third year running of the training program, the Cyberscouts' network already numbers more than 500 students in over 30 cities across the country. This programme has been positively evaluated by schools around the country and, each year, the number of requests has been growing.

More about the Cyberscouts programme can be found here.