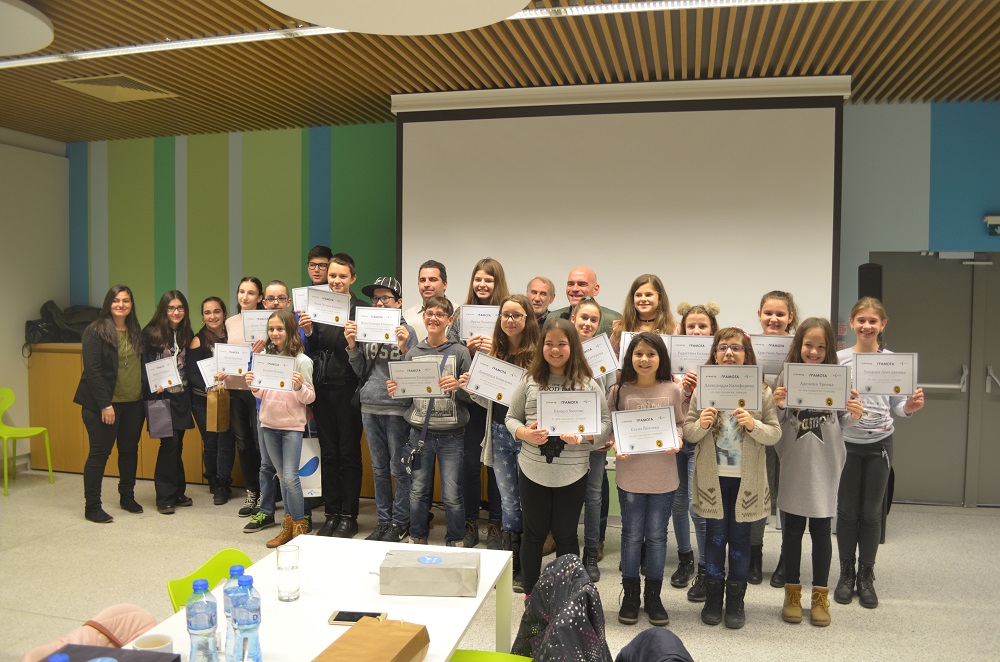 More than 50 people, including children and teenagers from 5 to 12 grade, teachers, representatives of various institutions and organisations, gathered at the Museum of Science “Muzeiko” in Sofia on 6th of February to mark the 15th Safer Internet Day.

Among the official guests of the event was the Executive Director of the Society for Electronic Communications and Deputy Chairman of the SIC Advisory board Aneta Ivanova, the Head of Transborder Organized Crime Department at General Directorate Combating Organized Crime, Yavor Kolev. The EU Commissioner for Digital Economy and Digital Society Maria Gabriel also joined the event through a video link with Strasbourg.

At the beginning of the event, 21 Cyberscouts from 79 Indira Gandi School in Sofia, Yane Sandanski Primary School in Plovdiv and Prof. Ivan Batakliev Primary School in Pazardjik were awarded with certificates from General Directorate Combating Organized Crime and tablets from Telenor Bulgaria and the Bulgarian Safer Internet Center. They participated in a national competition between 242 Cyberscouts from 12 settlements trained by the Safer Internet Center in 2017. The competition was for best activity for raising awareness on internet safety among peers.

The main module of the event was planned and conducted by young people from the Youth Panel of the Bulgarian Safer Internet Center. Young and adult participants were divided to groups and each group received one media post to discuss and decide whether it were true or false news and to prove their conclusion to others. The method of World Cafe was used and the participants moved to each table in order to discuss all the media materials. In the course of the discussion, the participants discussed on how can be verified whether an information online is true or false and pointed out the main appropriate methods for in information assessment.

A video-link from the event in Sofia with the participants in the European event for the Safer Internet Day in Strasbourg, led by EU commissioner Maria Gabriel, was established. The youth panellists presented what they have been discussing in Sofia (on the topic of fake news and information assessment), the new campaign in the schools by Bulgarian SIC and announced the launch of a mobile providing quick access to the SIC Helpline and Hotline, a password strength checker and a test to check one's knowledge about safer use of internet.

At the end of the event, a several campaigns and initiatives starting at the Safer Internet Day by a new Coalition for Digital Media Literacy in Education system including 14 organizations and institutions were also announced. Bulgarian Safer Internet Centre, as one of the founders of the coalition, provided lesson plans for teachers for development of digital and media skills in students. There are different lesson plans for the different age groups of children which are available on the Bulgarian Safer Internet Centre’s website www.safenet.bg and can be downloaded by teachers and used in class. A feedback form for teachers who want to use these lesson plans is also available on the website. As parental support for development of children’s digital and media literacy is also very important, along with these lesson plans, within the campaign, the Bulgarian Safer Internet Centre developed a particular presentation on Digital and Media Literacy for parents. It can be used by teachers for a starting point of a discussion with parents on this topic at school. This presentation is also available online and can be downloaded freely.

A new online campaign against hate speech online “Ot teb zavisi” (“It depends on you”), provided by Telenor Bulgaria with the support of Bulgarian SIC, was also announced. Within the campaign, famous Bulgarian vloggers, actors and singers participate in video clips in which they share their personal experience with hate speech online and give some advises for reaction to hateful comments.

The Voice of Children Foundation announced a competition for teenagers “The truth about…” Young people can participate with their essays, videos and audio records devoted to refutation of delusions and fake news. The best materials will be uploaded to the website of the foundation which is also a youth online media.

The Council of children of the State Agency for Child Protection announced the start of a series of discussion meetings on the topic of the safety of children on the Internet which will be provided in 15 districts in the country with the support of the Bulgarian National Television and the General Directorate Combating Organized Crimes.

Digital Kidz Foundation announced the start of a 6 month training programme for teachers and students which will be provided in more than 10 schools in the country.

This series of events and initiatives is united within the framework of the National Media Literacy Campaign, which will end on March 17 with a national parental forum in Sofia co-organised by Telenor Bulgaria, the online media "Maiko Mila" and the Safer Internet Centre.